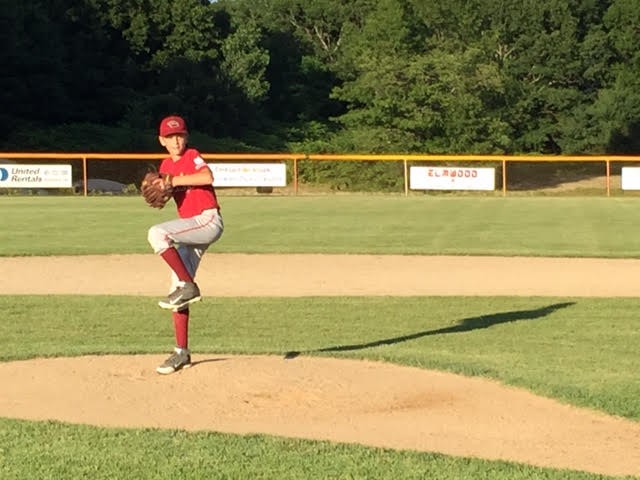 The odds of a pitcher tossing a no-hitter in Major League Baseball are 1 in 1,548. The same odds in Little League Baseball? Difficult to calculate. Add to the mix two Little League pitchers throwing no-hitters (both nearly perfect except for one walk and one hit batsman) in the same season and it’s nearly impossible.

At Deerfield Park on Thursday, June 18 during this year’s Smithfield Little League Majors Division Playoffs, Sport Clips Diamondbacks pitcher Christian Carmosino pitched six strong innings allowing no hits, one walk and recorded 15 strike-outs in his team’s quest for the Majors Division Championship Title. The no-hitter was Carmosino’s first, pitched in one of his last games as a Little Leaguer.

It was in the fourth inning that Carmosino realized he might achieve the rare baseball feat. At the conclusion of six innings, he was “relieved and happy that I was able to finish the game.”

As Carmosino pitched through the game, his Dad, Mas, assistant coach for the Diamondbacks, watched from the dugout as his Mom, Becky, and sister Sofia, observed the game from behind home plate.

“It was very exciting,” his parents shared. “Especially since it was part of a good, close playoff game between two good teams.

Diamondbacks Manager Mark Graham was so focused on the game itself, that it was not until the last out that he realized Christian had pitched Smithfield Little League’s second no-hitter of the season; the first, and only, in the Majors playoffs this year.

“Christian has proven himself to be one of the great competitors and champions that Smithfield Little League has ever seen,” said Graham. “We were all very proud of the way they played together as a team.  I always ask my players to ‘leave it all on the field’ and the night of Christian's no-hitter they all did that.  The boys have been working hard all spring and they can see now that their hard work and determination is paying off.”

Following the final out, Carmosino’s parents were happy that the team won the game, would move forward in the playoffs and “thrilled” for their son. Carmosino and his family capped the day with a stop for ice cream at Scoops! for cookie dough and cotton candy ice cream.

While the no-hitter is cemented among his Little League memories, the three homeruns he hit on Opening Day also created memorable moments for his 2015 season. Despite those notable on the field accomplishments, Little League has taught Carmosino much more than baseball fundamentals.

“Little League taught him (Christian) sportsmanship and how to perform under pressure,” said the Carmosinos. “What he learned in Little League will be with him forever and we are grateful for the great coaching he has received as well as the many friends he made along the way.”

Smithfield Little League welcomes information about player achievements on and off the field. Have an idea for a story? Let us know. Send your ideas to SmithfieldLittleLeaguePR@gmail.com.