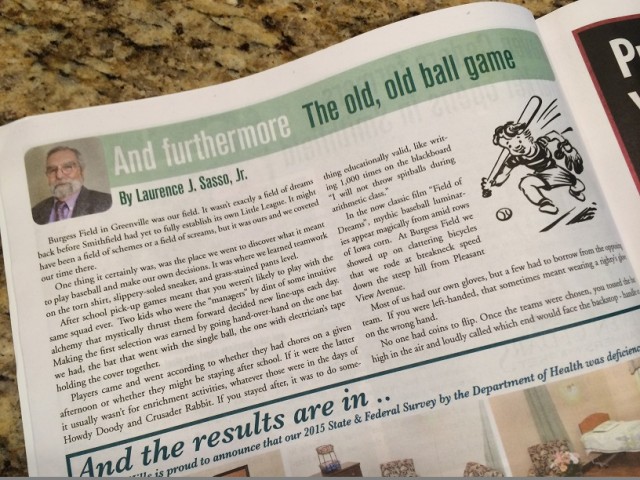 The following column appread in the July 2015 edition of The Smithfield Times and is shared on this website with permission from the Magazine.

Burgess Field in Greenville was our field. It wasn’t exactly a field of dreams back before Smithfield had yet to fully establish its own Little League. It might have been a field of schemes or a field of screams, but it was ours and we coveted our time there.

One thing it certainly was, was the place we went to discover what it meant to play baseball and make our own decisions. It was where we learned teamwork on the torn shirt, slippery-soled sneaker, and grass-stained pants level.

After school pick-up games meant that you weren’t likely to play with the same squad ever. Two kids who were the “managers” by dint of some intuitive alchemy that mystically thrust them forward decided new line-ups each day. Making the first selection was earned by going hand-over-hand on the one bat we had, the bat that went with the single ball, the one with electrician’s tape holding the cover together.

Players came and went according to whether they had chores on a given afternoon or whether they might be staying after school. If it were the latter it usually wasn’t for enrichment activities, whatever those were in the days of Howdy Doody and Crusader Rabbit. If you stayed after, it was to do something educationally valid, like writing 1,000 times on the blackboard “I will not throw spitballs during arithmetic class.”

In the now classic film “Field of Dreams”, mythic baseball luminaries appear magically from amid rows of Iowa corn. At Burgess Field we showed up on clattering bicycles that we rode at breakneck speed down the steep hill from Pleasant View Avenue.

Most of us had our own gloves, but a few had to borrow from the opposing team. If you were left-handed, that sometimes meant wearing a righty’s glove on the wrong hand.

No one had coins to flip. Once the teams were chosen, you tossed the bat high in the air and loudly called which end would face the backstop – handle or barrel – to determine who would be home team.

The catcher had no mask or chest protector. In fact, he usually didn’t have a catcher’s mitt, using instead a regular fielder’s glove. So, he would stand farther back than normal, meaning that he would often catch the ball on a bounce. This sometimes led to arguments about balls and strikes, which the catcher often called, there being no one remotely resembling an umpire present.

Two things kept squabbles about calls to a minimum. One – the catchers were surprisingly fair about their interpretation of pitches. Two – just about everybody swung lustily at the first pitch if it were anywhere near the strike zone, making it easier for the catcher to rule a pitch that was not offered at a ball.

We made judgments on fair or foul balls and such as we went along, with the biggest arguments coming on close calls on the bases. Sometimes everyone on both teams was polled to give their opinion on whether the runner was safe or out. Since the bases were mostly shards of cardboard torn unevenly from boxes, the shape of the base and the proximity of the defender’s foot could often produce lengthy disputes that involved geometry. (See? We were learning all sorts of practical stuff.)

Once in awhile when nothing else was available for a base, we used somebody’s jacket. That created another kind of debate altogether, with play being halted while we hashed out whether an unfurled sleeve gave the first baseman an undue advantage, since it considerably extended the size of the area he could tag and could be stretched out in whichever direction he chose, thus giving him more flexibility.

Screen Shot 2015-06-28 at 7.53.29 PM If the hitter ever drove the ball into the woods by the river, everyone on both teams went looking for it, dividing the scrub brush and weeds into a defacto grid like a CSI search team would. Some players were better at drawing a bead on long hits and foul balls and usually took the lead in these hunts. Others developed strategies for tracing the course of the ball, such as throwing a stone where they lost sight of the hit and then going to look for the stone, reasoning the ball would be nearby. About half the time it was impossible to find the stone, but somehow we almost always found the ball. However, as once happened, if a player’s dog picked up the ball and ran away with it, all bets were off.

When the games were over, the final inning being dependent on the waning twilight, everyone would shake hands and head over to the riverbank to take a big drink and cool off. Then we would climb on our bikes and pump like crazy for home and dinner.

Years and years later when, as adults, we learned that a mill up river was said to have discharged polluting chemicals into the same waters in that era, some of us looked in the mirror for evidence of irregularities, but no one seemed to be glowing in the dark.

Probably none of us remembered a score for any of those games by the next morning. A few of us might have savored memories of special hits or plays, such as long home runs into the woods, struck with a dried out old bat and a dead ball. Mostly, though, we remembered what it was like to learn how to work things out on our own, how, at a bare minimum, to arrive at a workable consensus, and, for the few who would go on and excel in organized sports, how to develop skills at our own pace without pressure from well-meaning adults. And, guess what? It was FUN!