Officials: Lights at Whipple would even playing field 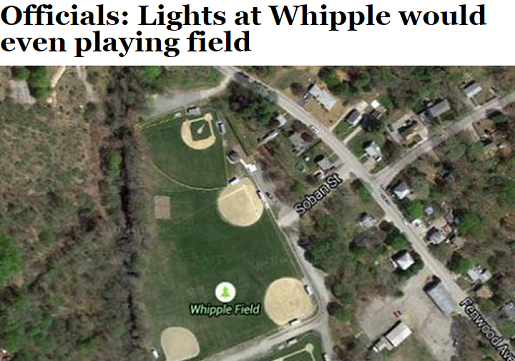 The following article was published in the September 9, 2015 edition of The Valley/ Breeze Observer.

Shane Moore, president of Smithfield Little League, spoke at the meeting in favor of the lights: "It would put our league on the same footing with the other leagues in our district that have lights ... Part of what we lack is that extra time to play, practice, (and) work."

Andrew Dyjak from Musco Sports Lighting, the company responsible for providing most of the equipment for the project, spoke at the meeting on behalf of Musco, which is based out of Connecticut.

"The proposal is to light all of the fields at Whipple Field," he said.

The Smithfield Girls Softball League and Smithfield Little League had expressed interest in adding lights to the fields, Hawkins later explained to The Observer.

"This year, the girls' softball championship game got canceled because there was no light," said resident John Conlin, who runs a softball league out of Pawtucket. "It's for the kids. Mostly for the kids' safety."

Hawkins told The Observer: "I think it benefits all the recreational leagues. I think it's well overdue."

The town plans to purchase the lights, poles, and related materials from Musco Sports Lighting, estimated at $285,000. That money will come from the town's impact fee account, town officials said.

Volunteer labor is expected to be provided by unions Local 57 of Rhode Island, the International Union of Operating Engineers, and Local 99, the International Brotherhood of Electrical Workers, Hawkins said at the meeting. He read letters from union officials who said that they will offer services and equipment toward the lighting project.

Having volunteer labor is similar to how the town added lights at the high school football field, which is the only sports field in town with lighting, Hawkins said.

"We work together with the unions," Dyjak said. "We're all working together to make sure it gets done correctly."

After town councilors questioned whether there would be any additional costs on top of the $285,000 price tag, Dyjak said that the town would need to secure conduit pipe and wire to connect the individual poles to a control cabinet.

"Before we can move forward, we need to get a plan from you to know how much wire and conduit we're going to need," Hawkins said to Dyjak.

Per the agreement made at the meeting, Musco officials will conduct a site survey and draw up engineer plans to give town officials a better idea of that.

The council also decided to include in their contract with Musco an option to back out if the cost comes back too high.

Later in the meeting, Moore told officials that the Smithfield Little League would be willing to put money into the project. "We would love to do that," he said.

The lights come with a 25-year warranty and maintenance agreement, Dyjak said.

Robert Sasso, president of the Smithfield Girls Softball League, also encouraged the lighting project, claiming that having a lighted field would bring more teams to play in town. Being able to host tournaments, he continued, would bring in more money for the town when teams stay over in hotels and eat at local restaurants.

"I hope that you'll consider that as far as the future of the league," he said. "The league has grown in leaps and bounds ... We want our kids to stay here and play in Smithfield."

Among the residents who spoke at the meeting, many, but not all, were in favor of adding the lights.

Town Manager Dennis Finlay noted that the town sent 175 letters to all the abutters of the Whipple Field complex, indicating that there was going to be meeting on Sept. 1.

Resident Richard Hebert, who lives on Fenwood Avenue across from Whipple Field, said that he loves the field but that he doesn't see the need to extend its hours.

"To be honest with you, I just don't see a need for the lighting down there," he said.

Resident Ryan McNelis, a former Town Council candidate, said that he lives near Smithfield High School and loves having the lights around the football field, noting that if he's inside at night, he can't even tell the lights are on.

Don Brown, a resident and former Town Councilor, expressed concerns about how the field would be lighted and about how late kids would be playing into the night.

"They go home all wound up about the games," he said. "I think it could hinder children with their homework and sleep while they're in school."

Dyjak told Brown that the intent is to light from the exterior of all the fields. "We cannot put ... for fields that abut each other ... lights in the outfield," he said.

If lights are added around the fields, Hawkins said that there will be time restrictions for how late games can play.

"It's not turn the lights on and leave them on all night long," he said.

Determining those times will be up the town's parks and recreation department, he added.

As a way to honor the late David Balcom, who was a supervisor for the town's recreation department, resident Gary Tikoian asked the council to consider naming the lights after Balcom.

"I said at the time of his passing, maybe we should dedicate something to Dave," he said. "I don't think anything has been done."