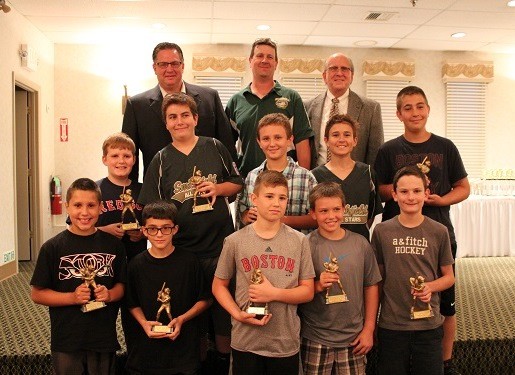 (HARRISVILLE, R.I.)-At the 2015 Smithfield Little League Awards Banquet held this evening at Wright’s Farm, the League recognized those players who demonstrated strong sportsmanship during this year’s recreational season. 14 players were awarded the coveted “Sportsmanship Award” joining a select group of Little League players who put respect for the game and their teammates above all.

The League also recognized John Golato, Sr. as 'Volunteer of the Year' for his many years of coaching and Steven Quattrini as the League's 'Man of the Year.'

After the final games of the recreational season, managers in the AAA Division and higher submit to the Board of Directors the player on their team who consistently demonstrated good sportsmanship. With a number of players in the League who embody this value, choosing only one sportsman on each team is often the most difficult decision a manager will make all season.

In 1973 then-League President Robert Salisbury established the Sportsmanship Award which has been bestowed upon Smithfield Little League players each year since then. Awards are presented to one player from each Senior League, Junior League, Majors and AAA team.

According to Little League, in 1938, its founder Carl Stotz sought to “provide a wholesome program of baseball for the boys of Williamsport, as a way to teach them the ideals of sportsmanship, fair play and teamwork.” Naturally, sportsmanship can be found at the very core of Little League Baseball’s mission, “by espousing the virtues of character, courage and loyalty, the Little League Baseball and Softball program is designed to develop superior citizens…”

More than 900 Smithfield Little League players have received the Sportsmanship Award since its inception more than 40 years ago.