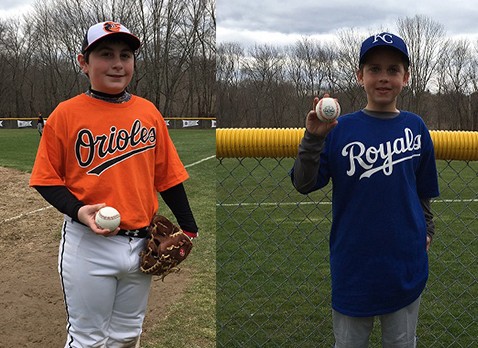 Smithfield, Rhode Island – Zander Semerjian and Nick Collins set off Opening Day fireworks, as both sent long balls over the fence at Whipple Field. With the 2016 season now officially underway, the league takes a quick pause today to recognize the home run hitters of the 2015 season.

A total of 30 home runs were hit by Smithfield Little League players in the Majors Division during the 2015 recreational season. Six players hit more than one home run and one player rounded the bases five times throughout the season.

Not only did first baseman and catcher Gian Carrocchio hit three home runs during the regular season, but one was a grand slam that lifted his team, the Sports Clips Diamondbacks to a 10 – 7 win against The Valley Breeze Observer Rays. He proudly displays the home run balls at home.

Despite those home runs, Carrocchio has other fond memories of the 2015 season.

“My favorite game was Opening Day, because I finally was able to play baseball again,” said Carrocchio.

Joey Pitrone III led the recreational league with five home runs across a number of games during the 2015 season.

The pitcher, catcher, short stop and first baseman for The Valley Breeze Rays has each of the five home run balls displayed in cases in his room.

His favorite memory of the 2015 season? “When we played the Dodgers the first time in the playoffs and hit a grand slam,” shared Pitrone.

The Dodgers’ Noah Morin hit a four home runs across multiple games; two at Deerfield, one at Mendes and another at Whipple. Morin played the positions of first base, pitcher and short stop.

“My first thought on hitting the home run was WOW, I can't believe I just hit a home run,” shared Morin.

The home run balls are now displayed on a trophy shelf at home.

The Sport Clips Diamondback’s Christian Carmosino not only enjoyed a commanding season on the mound, but also at the plate.

Carmosino threw a no hitter and also hit four home runs across a number of games at Whipple Field. Last season, Carmosino also saw time at catcher and short stop.

Despite his success pitching and hitting last year, his favorite game was not one in which he made a personal accomplishment, rather one that was a team win.

“My favorite game was when we won the Championship and I saw the catcher catch the ball for the final out,” shared Carmosino.

His home run balls - and one from this no hitter - are displayed in what is likely a bulging Little League Memory Case.

The KFC/ Taco Bell Angel’s Jacob D’Amico’s first response after hitting his first home run at Deerfield was shock followed by an exclamation of “Wow!” He would continue hitting home runs into the All-Star season.

“I was first up to bat and hit a home run which started a chain reaction, everyone on my team started hitting them too,” shard D’Amico. “Great game, everyone was so excited and played excellent.”

The home run balls hit by D’Amico were retrieved and presented to him. Upon arriving at home, he memorialized the feat by inscribing on the ball the date, field played upon and final score of the game. D’Amico played catcher, center field and short stop during the 2015 recreational season.

“My best memory was when I hit my first home run ever,” said the A’s Tommy Sheppard who hit two home runs last season, both in the same game at Deerfield Park. The home run balls are displayed adjacent to other trophies he earned.

Sheppard played first base, pitcher, second base, short stop, third base last season and is now playing in the Jr. League Division.

Among the Majors Division teams the Diamondbacks reported eight home runs; the Rays followed with six; A’s, five; Dodgers and Angels tied for four; and the Red Sox with three.

There were no home runs reported in the AAA Division.

The league is also following our big bombers for the 2016 season.

(Information for this article was confirmed by 2015 Majors Division Managers.)