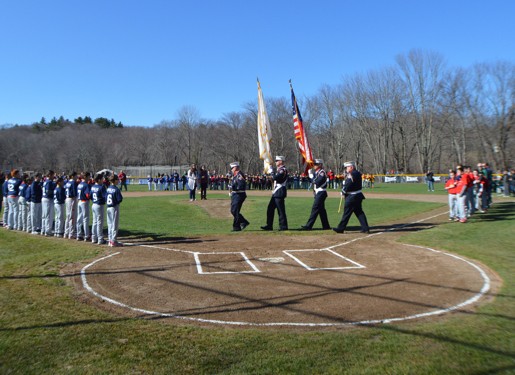 Hundreds of players, family members and friends showed up for the opening of another exciting season of baseball in Smithfield. The season’s first pitch was  thrown out by Bill Kerwin, a Marine veteran, whose son Dylan will be competing in the AAA Division this year. The national anthem was sung by students from the Gallagher Middle School chorus.

In total, 13 games were played at the Whipple Field complex, with contests ranging from the AA-level through Juniors. Click here for results from AAA and Majors. To see photos and a video recap of the day, visit us on Facebook.

A special thanks goes out to all of the volunteers who helped with field prep, coaching, concession stand duty, and everything in between; the parents who brought their kids out early in sub-40 degree temperatures for team photos and opening ceremonies, and stuck around to cheer on their teams; the umpires, many of whom worked double duty to keep us covered throghout the day; and of course, the players who gave it their all and made the day fun for everyone.

2016 promises to be a fantastic season!