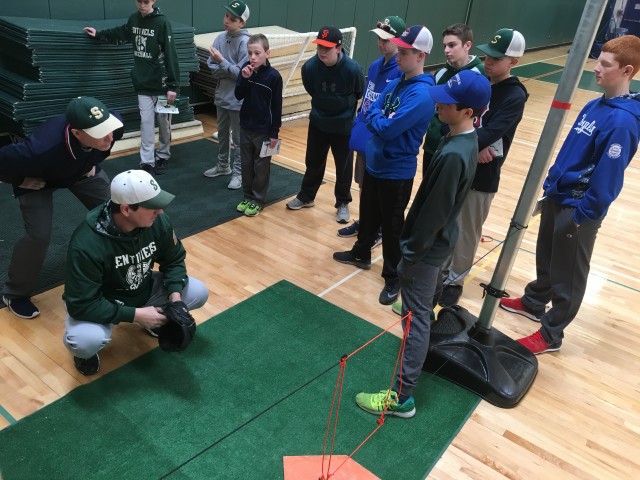 Held in the recently renovated gymnasium at Smithfield High School, League Board Member and four-year Umpire Coordinator Keith Greene began his two-hour presentation with a review of the key pieces of umpire’s safety equipment which are mandated in the league, including: shin pads, chest guard and mask. Green was assisted by League President Shane Moore and former players and veteran Smithfield Little League umpires Michael Cronin and Alexander Tedeschi. A total of 21 current or former Smithfield Little League players, including eight rookie umpires, attended the clinic.

Following a thorough explanation of the umpire’s gear, Greene stressed the importance of umpires’ appearance. All umpires in Smithfield Little League are required to wear a collared blue shirt and grey pants.

“Our umpires should look as professional as possible,” explained Greene to the group of umpires ages 11 to 16. “Looking professional provides legitimacy. The younger kids look up to the older players and respect the fact that someone who plays on the high school junior varsity team comes down to call a Little League game.”

“Show up for your job and show up on time,” shared Greene.

Similar to Major League Baseball efforts to speed up the pace of the game, Moore offered suggestions to keep the game moving such as having an extra baseball ready during pitching warm ups so that pitchers are not chasing passed balls and encouraging a quick transition in between innings. During games, Greene suggested to the umpires in training that not only should umpires call strike or ball, but also, verbally, or by using hand signals, remind the pitcher and batter of the count.

Greene also reflected on what should motivate the rookie umpires to call games: the kids. “We’re [umpires] here because we have a league for kids to develop their baseball skills; a good competitive league,” shared Greene. He also stated that umpires must have a love of the game and their knowledge of the game will be an important asset.

The clinic also touched upon some difficult situations in which umpires may find themselves in regard to coaches and, unfortunately, even parents.

“You can only control what is going on inside the fence,” explained Greene. “Whatever is going on outside the fence, you cannot control. Talk to managers in regard to unruly parents and ask them to handle the situation. If they are distracting the game, they are distracting the kids. Don’t get into a confrontation and do not engage parents or fans.”

Umpires were also reminded that if a parent continues to distract the game, as the game official, they may halt play until the problem is addressed by a manager. They were also informed that if a coach was commenting on every call for each pitch that they should pull the coach aside in between innings and let him, or her, know that the comments are unnecessary.

“Don’t try to make up a call; it is what it is,” said Greene. “Live with the call and move on. Once you call it, you own it. Don’t seek reassurance on calls from fans or friends.”

According to bylaws approved by the league’s Board of Directors, only a manager may challenge an umpire’s call. If a coach appeals a call, umpires have been directed to ignore that appeal and if the coach enters the field, they will be instructed to return to the dugout.

Another situation that umpires may experience is swearing. Greene was clear on this matter.

“If a manager or coach swears, throw them out immediately, don’t hesitate,” Greene instructed.

Until a game begins, the league’s Board of Directors is responsible for postponing, or cancelling, a game. Once the first pitch is tossed, it is the umpire’s purview to make such a decision, except during occurrences of lightning. When lightning strikes, games are to be suspended immediately and players and families must return to their cars. According to a policy promulgated last summer by Rhode Island District 4 Little League, following the first strike of lightning, games must be delayed at least 15 minutes. If another lightning strike occurs within the first 15 minute delay, another 15 minutes is added from the time of the second strike. An additional 15 minute delay is added for every lightning strike.

Following the formal presentation, Greene, Moore and five-year umpire Cronin trained umpires on calling games from behind the plate while Tedeschi worked with a separate group on officiating in the field.

Traditionally the umpire clinic takes place on one of the town’s many baseball fields, but was moved indoors as a result of unseasonable rain, snow and sleet that bombarded the town on Friday and concluded on April Fools’ Day.