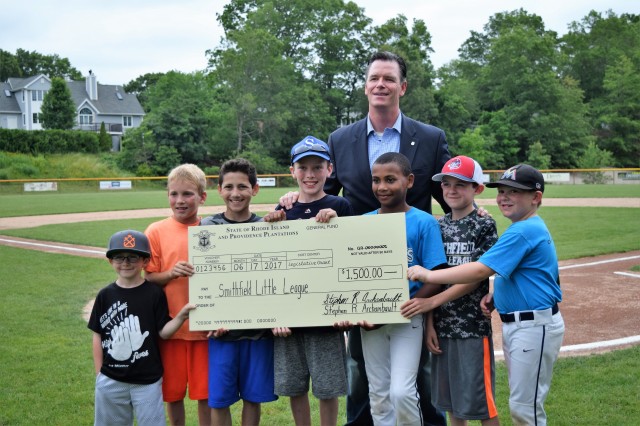 SMITHFIELD, Rhode Island – In between the AAA and Majors Division Championship games on Saturday, June 17, at Lou Dinoble Field in Deerfield Park, State Senator Stephen R. Archambault, a former Smithfield Little League player for many years, announced a grant in the amount of $1,500 for the league to purchase new safety equipment.

The league will use the grant funds to purchase new protective gear for catchers (masks and helmets, throat guards, chest protectors and shin guards) and umpires. Currently, the league is utilizing equipment that has been used for a number of seasons. To promote safe play, the league has prioritized the purchase of new equipment, but lacked sufficient funding to do so until this grant was awarded.

“I am pleased to award this grant to Smithfield Little League for the procurement of new safety gear,” said Senator Archambault. “As a former player in the league, I know first-hand the importance of promoting safety during practices and games, but also providing to players equipment in good working condition, such as helmets, catcher’s gear and protective equipment for umpires. I am hopeful that these funds will help the league obtain new equipment that will last for many years as youth in our town develop a love for the game of baseball.”

“On behalf of the hundreds of families who comprise Smithfield Little League – in particular the players – we are grateful to Senator Archambault for awarding these needed funds to the league,” said R. Shane Moore, President, Smithfield Little League. “The league will use these funds to purchase new equipment that will enhance player and umpire safety. This grant is yet another example of how we can provide for the youth of Smithfield when we work together as a community.”

Catchers’ gear that can endure the wear and tear of multiple Little League seasons can cost anywhere from $100 to $250 per set. While costly, the gear is critical to promoting safety for catchers at all levels of play, considering their duties receiving or blocking pitches thrown at an array of speeds. Similarly, the league provides its umpires with protective gear such as masks and chest guards, gear that has spared the league’s umpires - many of whom are in middle and high school - from potential injury.

According to Little League International, ASAP is a grassroots program based on communication of ideas. Leagues across the country contribute their safety ideas to ASAP News, a colorful, monthly newsletter. Safety officers can then find out what their peers are doing to make things "safer for the kids."