Scholarships Recognize Service in Support of Youth Baseball in Smithfield 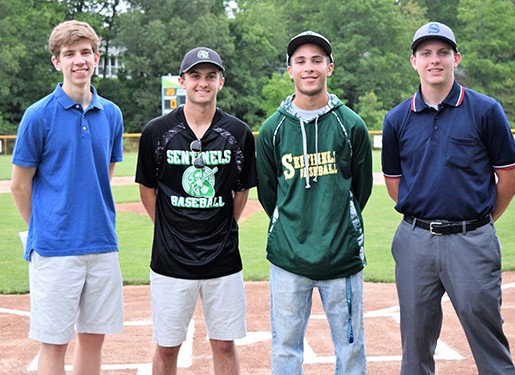 SMITHFIELD, Rhode Island – On Saturday afternoon between the AAA and Majors Divisions Championship Games, Smithfield Little League held a brief ceremony during which it awarded $3,000 in college scholarships to six former players who are graduating from high school and pursuing college studies. The one year, $500 competitive scholarships are awarded to former players who years after they concluded their Smithfield Little League careers, continued to embody the ideals and values of the league through volunteer service or other contributions to youth baseball in Smithfield.

The former players who attended the ceremony to receive their scholarship include: Michael Cronan,

Corey Mabray, Owen Placido and Nicholas Squillante. Two other recipients, Ally Beaton and Brian Goodwin, were unable to attend due to prior commitments.

New for this year’s eligibility requirements, seasons of play is no longer the sole criteria for consideration. The league’s board of directors unanimously voted to equally consider an applicant's service to the league in addition to years played. Service includes the number of seasons as an umpire, serving as a Challenger Buddy, helping to coach a team, or other efforts in support of youth baseball in Smithfield. Challenger Buddies volunteer for two hours on Sunday afternoons to help those with special needs participate in, and develop a love for, the game of baseball.

Applicants were required to participate in at least five seasons of Little League (recreational, all-stars and fall ball count as one season each) and submit a copy of an acceptance letter to an accredited college, university or trade school. Each applicant was also asked to write a 500-word essay sharing how Smithfield Little League impacted their personal and academic development. A committee comprised of five members of the league’s board of directors reviewed and voted upon all applications.

The scholarship is funded by generous individuals throughout the Smithfield Little League community.

Current and former board members donated in excess of $1,000; families made donations when they registered their children for the recreational season; the league held a “yard sale” to sell new, unused equipment, of which the proceeds went to the fund; a portion of the sponsor fee was earmarked for the fund; and a Comedy Night held in late April and attended by nearly 100 friends of the league raised considerable resources in support of the fund.

Ally Beaton​, who transitioned to softball after nine seasons in Little League, will continue her softball career as a Greyhound at Assumption College. Beaton served as a Challenger Buddy where she volunteered in support of the Challenger players during the 2010 season. She holds a special distinction of being the only female in recent years to make the Smithfield Little League 12-year-old All-star Team two years in a row.

“Playing Little League Baseball as a girl did not faze me in the early years, but as the pressure to perform with the boys became greater in my later years, I believe it helped to strengthen my mental toughness in life,” shared Beaton. “The structure and focus I learned in baseball helped me learn time management and organizational skills at a young age. If it had not been for the coaching and instruction I received during Little League while I was growing up, I do not think I would have been able to excel in softball in my later years.”

Beaton also reflected upon her volunteer work with the Challenger Division.

“One of my favorite parts of Little League was being able to help out in the Challenger Division,” explained Beaton. “Seeing the smiles on all their faces truly made me feel so appreciative to be part of such a great town league. I will forever be thankful to my parents for letting me play baseball in the

Following his 12 seasons as a player in Smithfield Little League, Michael Cronan remains on the league’s fields where he has served as an umpire for 10 seasons - and counting - including this year. He holds the distinction of having umpired more games than any umpire in recent history of Smithfield Little League and has become a role model for many of the AAA and Major’s Division players. Cronan, who will advance his baseball career at Rivier University this fall, also served as a Challenger Buddy.

“Perhaps the greatest mark of Little League in who I am today is the character that I have become through my coaches,” shared Cronan in his application essay. “Every single one of my coaches has left permanent marks on the man I have grown into. These great men combined with Little League Baseball have developed me into a considerate, humble, intelligent young man who has lots of integrity and knows how to be a role model for those who are younger than me.”

Baseball,” added Cronan. “The positive characteristics that I have taken ownership of have allowed me to excel in the classroom. I can truly say that I owe the fact of who I am today to Little League.”

Not only did Brian Goodwin play for five seasons of Little League Baseball, but he also served as a

Challenger Buddy for three years. Goodwin will attend Muhlenberg College this fall. In his application essay, he shared how Little League served as the catalyst for his love of sports and competition and how volunteering in support of the Challenger Division has inspired him to approach life with the same will and determination as the Challenger players.

“From T-ball until my final year in Little League, I am able to truthfully say that I learned values that I will continue to use to have success not only in my athletic career, but in my working life,” Goodwin explained. “Teamwork, respect, responsibility and competition were all aspects of the game that were taught to me form a very young age through Little League Baseball. Whether it was my coach talking to our team in the dugout after a tough loss, or encouraging me after a strikeout, I learned to appreciate having the opportunity to take the field.”

“Showing up every Sunday in the spring to help the Challenger Division and be a ‘Buddy’ to the kids will have a lasting impact on me,” explained Goodwin. “They encourage me, even in what I consider times of struggle, to push forward and never give up. Whether it is a struggle in the classroom or out on the field, this ‘never give up’ attitude is going to guide me for the remainder of my life.”

“Success begins with opportunity,” Goodwin added. “I truthfully would not have the opportunity without Smithfield Little League.”

Little League and also served as an umpire.

“Baseball teaches you that in life, you do not have to be perfect at everything and no matter how hard you try, you will not be,” wrote Mabray in his essay. "Baseball has also helped me develop skills with time management. Between practice, games, school, schoolwork, family time and being a high school student, this type of agenda is not an easy one to balance. I realized that getting good grades and doing well in school comes first.”

Owen Placido will attend the University of Rhode Island to study environmental science and management. Placido played with Smithfield Little League for 10 years, served as an umpire for four years and spent one season as a Challenger Buddy.

“Far and away the biggest way Smithfield Little League has impacted my life is by teaching me the value of teamwork,” shared Placido in his application essay. “No matter the age group or season, until there was an effective system of teamwork, no team I have been on has operated at the ideal level. These lessons of teamwork have been most rewarding when they impact my life beyond the baseball field.”

Nicholas Squillante began playing Little League in 2005 in the T-ball division and played for 13 seasons.

He also served as an umpire for three seasons. Squillante, who will attend the University of Rhode

Island’s College of Business Administration in the fall, not only learned how to play the game of baseball during his many seasons of play, but also the importance of the game to one’s personal development.

“In baseball, you realize that it’s not all about you,” shared Squillante in his essay. “You may be the only one in the batter’s box at the time, but you still need to work together and support each other. People will always have differences, but if you work together, you can accomplish so much more just like in baseball.”

“Playing baseball has taught me many character traits that I hope to continue to emulate as I move on to college,” Squillante added. “Some of them are sportsmanship and the importance of being a good winner and loser. My Dad told me to always remember to ‘win with humility and lose with dignity.’ I think that statement can relate to all aspects of life.”