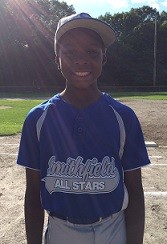 Mensah received the pitching award on Friday, August 1 prior to the Paw Sox games against the Syracuse Chiefs.

Major League Baseball also shares that the run portion of the program measures a competitor's speed in a sprint from the start line at second base, touching third base, and touching home plate. Participants in the boys’ baseball division run a total of 160 feet.

Mensah is currently plays on the Smithfield AAA All-Star Team and earlier this year was a member of the Threshers during the 2014 spring season.