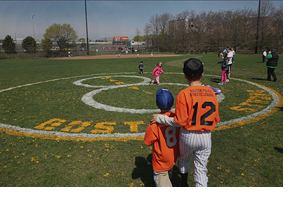 During Smithfield Little League’s 2014 opening day ceremonies, the league will join others throughout New England to recognize the victims of the Boston Marathon and help to raise $50,000 in support of The Martin Richard Foundation.

Martin was the 8-year-old from Dorchester, Massachusetts who was killed last year in the Boston Marathon bombings. His sister Jane lost a leg, his mom Denise suffered severe hearing and sight loss and Martin’s dad suffered injuries to his legs and hearing loss in the attack.

With a passion for baseball, Martin played for Savin Hill Little League, hitting two home runs in his last season of play. Martin played shortstop, pitcher and second base.

In January 2014, the Richard family launched ‘The Martin Richard Foundation’ to honor Martin’s memory and to support athletic, educational and community endeavors. During opening day, Smithfield Little League will ‘pass the hat’ asking attendees to make a donation in any amount. All proceeds will be forwarded to Grafton Little League in support of the foundation.