6.01.2007: Your Smithfield Magazine- Little League is still the best show in town 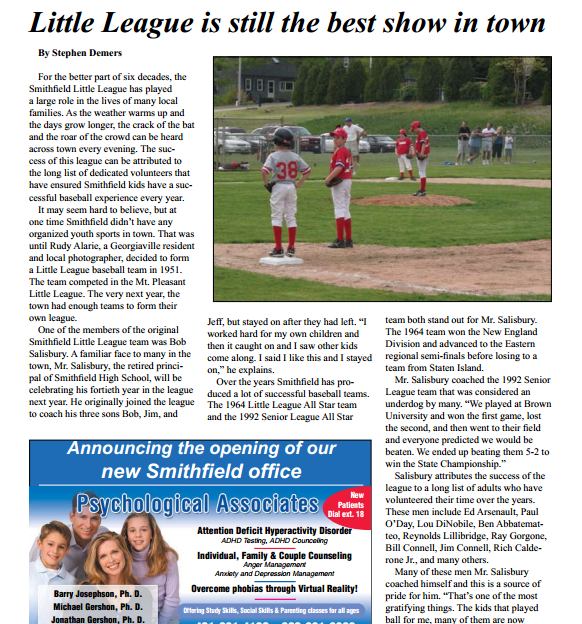 Little League is still the best show in town

For the better part of six decades, the Smithfield Little League has played a large role in the lives of many local families. As the weather warms up and the days grow longer, the crack of the bat and the roar of the crowd can be heard across town every evening. The success of this league can be attributed to the long list of dedicated volunteers that have ensured Smithfield kids have a successful baseball experience every year.

It may seem hard to believe, but at one time Smithfield didn’t have any organized youth sports in town. That was until Rudy Alarie, a Georgiaville resident and local photographer, decided to form a Little League baseball team in 1951.

The team competed in the Mt. Pleasant Little League. The very next year, the town had enough teams to form their own league.

One of the members of the original Smithfield Little League team was Bob Salisbury. A familiar face to many in the town, Mr. Salisbury, the retired principal of Smithfield High School, will be celebrating his fortieth year in the league next year. He originally joined the league to coach his three sons Bob, Jim, and Little League is still the best show in town Jeff, but stayed on after they had left. “I worked hard for my own children and then it caught on and I saw other kids come along. I said I like this and I stayed on,” he explains.

Over the years Smithfield has produced a lot of successful baseball teams.

The 1964 team won the New England Division and advanced to the Eastern regional semi-finals before losing to a team from Staten Island.

Mr. Salisbury coached the 1992 Senior League team that was considered an underdog by many. “We played at Brown University and won the first game, lost the second, and then went to their field and everyone predicted we would be beaten. We ended up beating them 5-2 to win the State Championship.”

Salisbury attributes the success of the league to a long list of adults who have volunteered their time over the years.

Many of these men Mr. Salisbury coached himself and this is a source of pride for him. “That’s one of the most gratifying things. The kids that played ball for me, many of them are now coaching. Somewhere along the line someone must have set a good example if they want to do the same thing.”

Coach Salisbury also credits the many men who have served as league President.

Having served in that capacity for three years, he understands the pressure of that position. “Anybody that takes on the role of being President of the Little League, takes on a big responsibility because you are giving up a lot of time,” he said.

Over the years, the league has continued to grow and get better, but Mr. Salisbury believes society has changed. “Kids are more diversified, they get wrapped up in so many outside activities after Little League that it’s difficult to get ten, twelve, or fifteen kids at a practice. Years ago they played soccer in the fall, hockey in the winter, and baseball in the spring. Now they play hockey and soccer year round.”

The coach believes, however, Smithfield Little League is still the best show in town.

Even with all of the competition from other youth organizations, the league shows no sign of slowing down. The organization currently has five Tee Ball teams, nine Farm Minor teams, ten Farm Major teams, eight Little League teams, and four Junior League teams. In addition, three years ago the league started a fast-pitch softball division for girls in town. This division still only has a few teams, but is quickly growing now that the middle school and high school teams both compete at the fast-pitch level.

With over 550 kids participating in the league, a strain has been placed on the town’s fields. The LaPerche School Field was converted for the fast-pitch softball division, so the league had essentially been operating with one less Little League field.

That all changed when a new field at Deerfield Park opened in mid-May. Named after longtime Little League volunteer Lou Dinoble, the field has restrooms and a concession stand. It will most likely replace Whipple Field as the site of Little League All-Star games in the future.

Current league President, Charlie Kando, believes that the new field has lessened the load on the other fields, but there is still a lot of work to do. “All of the fields require some type of improvement. In the future some of the fields may have to be put out of service for a year.” He believes the league does its best with maintaining the fields, considering not all the fields have a water supply or electricity. In addition, two of the fields are located on school property which results in many restrictions.

Mr. Kando ultimately believes the main goal of the league is to, “keep kids involved as long as possible and keep them active in baseball.”

Now in its fifty-sixth year, the Smithfield Little League has brought joy to many during long spring and summer days. It has taught the fundamentals of baseball and the importance of teamwork. In the opinion of many who have witnessed its growth through the years, as long as dedicated adults continue to volunteer, this successful organization will continue to prosper in Smithfield.

Stephen Demers is the sports editor of Bryant University’s student newspaper, The Archway. He is a graduate of Smithfield High School where he was editor of the school newspaper, Our 2 Cents. He pitched and played in the outfield for the Rome Packing Team in Smithfield Little League.