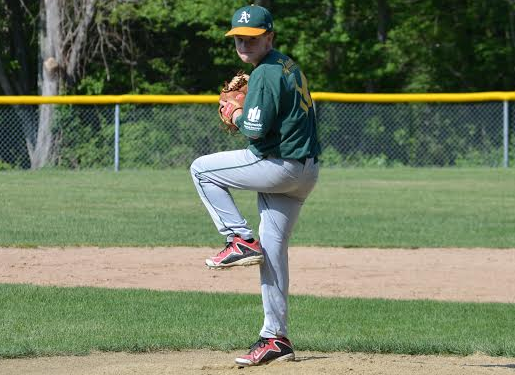 SMITHFIELD, Rhode Island -- Since 1876, only 287 Major League pitchers have accomplished such a feat. On a warm spring evening in Smithfield, a 12-year-old Little League pitcher- with a little help from his teammates- would achieve a similar feat though on a much smaller field.

On Thursday, April 30, the Laura’s Restaurant Athletics’ Alex Niquette became the first pitcher this season in the Majors Division to throw a no-hitter tossing only 69 total pitches over six innings at Whipple Field.

Hitting one batter- the only opposing runner to reach base that evening - Niquette recorded 12 strikeouts and walked none. The opposing team made contact four times, but Niquette’s no-no remained in tact thanks to the support of his teammates patrolling the field.

It was not until the end of the 4th inning that Niquette realized he might be pitching his way to his first no-hitter. His first thought after pitching a final swinging strikeout was not the no-hitter, rather that the team had won.

After the game, the first person Niquette called was his Mom, Cheryl, who was watching his sister, Lily’s, soccer scrimmage across town at Deerfield. His Dad, Ray, witnessed the game from beginning to end.

“This is the first no-hitter I've ever seen from the first out to the last out, so I was very excited for him,” said Ray. “We talked about the game a lot that night.  Alex was clearly thrilled, but he has been humbled about being recognized for this accomplishment.”

The Niquette Family credits Little League with teaching their son that “the experience of developing relationships with his friends outside of school has been important.”

The no-hitter is not, however, his fondest memory of Little League Baseball, rather “hitting my first home run…at Opening Day,” Niquette shared. Among the greatest values he has learned in baseball is not individual accomplishment, rather “that you win and lose as a team.”

“Alex was dominant on the mound and seemed to be able to throw a strike at any time,” said A’s Manager Jay Kennedy. “He seemed to be in a zone and dominated the game.  Usually during a no-hitter there is always one defensive play that stands out....that play was Matt Antunes making a diving catch in center field.  It was a great day for Alex and the team!”

According to Major League Baseball, Cy Young holds the Major League record with 23 consecutive scoreless innings pitched; the Yankees' Don Larsen became the first to throw a no-hitter in the World Series against the Dodgers in 1956 and remains the only pitcher to record a no-no in the postseason.

MLB reports that retired Red Sox catcher Jason Varitek has caught four no-hitters, the most of any catcher: Hideo Nomo (2001), Derek Lowe (2002), Clay Buchholz (2007) and Jon Lester (2008). The Major League record for no-hitters belongs to Nolan Ryan, with seven; the last taking place at the age of 44.

The first known Little League no-hitter took place in 1942 as the nation was at war when Ed Yonkin threw a no-no leading his Lundy Lumber team over Stein’s Service.