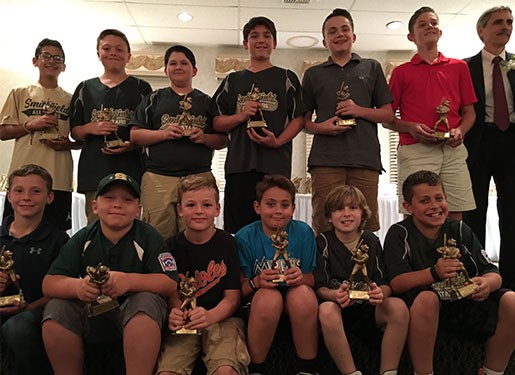 (BURRILLVILLE, R.I.)-At an awards dinner held Sept. 21 at Wright’s Farm attended by more than 250, Smithfield Little League recognized the 2017 division champions, all-stars and players who demonstrated the virtues of sportsmanship during the regular season. The league also recognized sponsors and other volunteers.

The Sportsmanship Award recognizes the good character of a single player on each AAA, Majors and Junior League team throughout the league. Players chosen to receive this award have a great respect for the game of baseball, play a fair game, respect their opponent and demonstrate honorable behavior in winning or losing. The award was first established in 1973.

Those players selected by their team manager to receive a 2017 Sportsmanship Award include:

Smithfield Little League congratulates those who have earned the distinct honor of receiving a sportsmanship award.